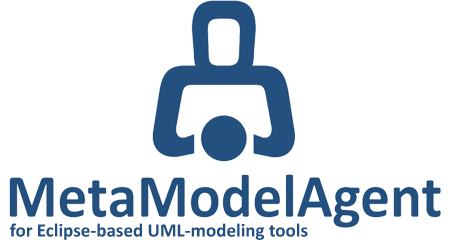 MetaModelAgent has been continually extended with more and more features and is currently a modeling tool extension for UML-based domain-specific modeling as well as for standard UML and UML-RT modeling.

MetaModelAgent is certified as "Ready for IBM Rational Software".

MetaModelAgent can be downloaded and installed upon an existing supported Eclipse-bassed modeling tool using the public update site metamodelagent.com/update, see get started for more information.

Single Limited FREE and EVALUATION Licenses can be requested, and subscription licenses can be purchased, after the tool has been installed.

Server-based licenses can be ordered direcly using the form at Adocus website.

MetaModelAgent is developed and provided by Adocus AB, a company specialized in modeling tools and professional services within business and software modeling and architecture.